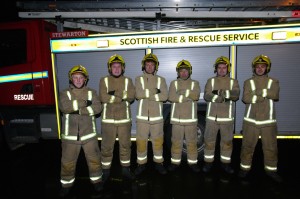 We’ve all seen the Hollywood films. The fire alarm sounds and all the fire fighters stop what they are doing, get their fire kit on and are all assembled and ready to go within minutes. No confusion and the whole crew are accounted for.

However, Stewarton is a long way from Hollywood and things are done a little differently around here. Stewarton Community Fire Station, like many others in rural parts of the UK, employs retained firefighters only. What this means is instead of full time staff, Stewarton relies on local people with other jobs to come to their aid in the event of an emergency. When required to answer an emergency call, these men and women are summoned to the fire station by a radio pager. Once at the station, they crew the fire engine and make their way to the incident.

When these pagers go off, the retained firefighters have to drop everything, no matter where they are or who they are with. This is a huge commitment as not only does it affect the firefighter’s social and working life, but it impacts their family life as well. An example of this would be if a firefighter has a young child at home, he has to ensure that the child’s mother is able to take over so he can be out the door as soon as his pager goes off.

A huge vote of thanks must go to the local employers who support the Scottish Fire and Rescue Service by allowing their staff to respond to pagers and leave their place of work with no notice during the working day. Only with their support could a local crew be mobilised to deal with emergencies in and around Stewarton.

One of the Stewarton station’s biggest problems is struggling to employ retained personnel. A major factor in this is that, like many towns in the Glasgow commuter belt, a huge number of people work outside the town, which would make it impossible for them to respond to emergencies within the attendance time set out by the Scottish Fire and Rescue Service. Stewarton are always on the lookout for potential recruits, and anyone who lives within a mile and works within two miles of the station and is aged 18 or over may be considered. Along with being on call for a maximum of 120 hours per week, there is also three hours training every week at the station. While it is a big commitment, it is also a hugely rewarding one. Retained firefighters receive a salary and are paid for drill nights and turnouts to incidents.

At the moment, Stewarton’s station is made up of nine retained staff, whose jobs and roles in the community are varied. The following people make up the team:

Between this group of firefighters there is a wealth of experience, and down the years they have been called out to all kinds of emergencies, from domestic fires to water rescues to road collisions. The biggest call out the team have faced occurred in 2009 when a freight train carrying kerosene and diesel crashed half a mile south of Stewarton’s train station and caught fire. More than 50 fire crew were involved in controlling the blaze.

While attending to emergencies and controlling fires make up a huge part of the job, the Stewarton team cannot stress enough that fire prevention is equally important. As part of their commitment to building a safer Scotland, The Scottish Fire and Rescue Service offer everyone in Scotland a free home fire safety visit. This is where the firefighters come and advise you on home safety and where necessary they will also fit smoke alarms free of charge. The safety of yourself and your family really is paramount, and it is recommended that everyone should consider their safety in an around the house.

All the information for this can be found on the website, www.firescotland.gov.uk.

The crew at Stewarton fire station do a wonderful job, and it has been a pleasure for us at The Review to be able to give you a small insight in to what they do. We also hope this article will inspire some local people, young and old, in to considering a retained role within the fire service. Finally, if you feel like giving a little back, the guys at Stewarton station will be holding a charity car wash in the coming months, details of which will be released shortly. 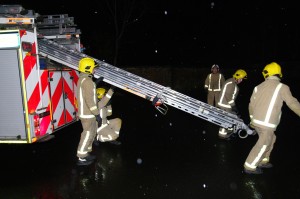 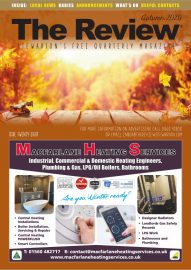