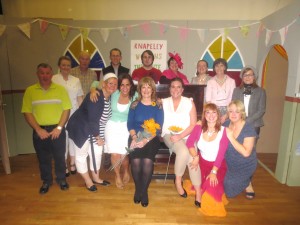 EXTRA PERFORMANCE ADDED DUE TO OVERWHELMING DEMAND FOR TICKETS

An Ayrshire theatre company are all set to bring the smash-hit play ‘Calendar Girls’ to Ayrshire later this month. And news that the award-winning Stewarton Drama Group are staging the popular play has sparked such a rush for ticket orders, that an extra performance has now been added due to the overwhelming demand for seats.

The hit play will now be staged in the theatre in the Stewarton Area Centre at 7.30pm on Wednesday 23rd, Thursday 24th, Friday 25th and Saturday 26th October 2013 to mark Stewarton Drama Group’s 40th Birthday. Because the performances on Friday 25th and Saturday 26th are both now sold out, the Group were delighted to announce that they have released tickets for an additional performance of the play on Wednesday 23rd October at 7.30pm.

Based on a true story, the play follows a group of women, members of a very ordinary Women’s Institute, who sparked a global phenomenon by persuading one another to pose for a charity calendar with a difference.  Interest snowballs, as it becomes clear that the ‘Calendar Girls’ are revealing a bit more than the usual pleasant pastures!

This true story inspired the 2003 Hollywood film by Tim Firth, starring Helen Mirren and Julie Walters, which went to number one in the UK, becoming one of the most successful British films of all time, earning a place as one of the top 50 grossing films in UK cinema history.

The professional run of the stage play of ‘Calendar Girls’ in the West End of London and the subsequent tour broke all box office records, becoming the fastest selling tour in UK theatre history with a glowing set of reviews from all over the country, and grossing more at the box office than the original film.

The appeal of the play lies not only in the story, but also in the characters, the fun and the friendship which emerge triumphant at the end, in spite of the challenges, trials and loss which the women have to face.

When Annie’s husband John dies of leukaemia, she and best friend Chris resolve to raise money for a new settee in the local hospital waiting room. They manage to persuade four fellow WI members, Cora, Ceila, Ruth and Jessie, to pose nude with them for an ‘alternative’ calendar, with a little help from hospital porter and amateur photographer, Lawrence. News of the women’s charitable venture spreads like wildfire, and hordes of press soon descend on the small village of Knapeley in the Yorkshire Dales. The calendar is a success, but Chris and Annie’s friendship is put to the test under the strain of their new-found fame.

“This is a must­-see play which strikes a chord with everyone. It is about very ordinary women who do something quite extraordinary, brave and inspirational when faced with loss.

“The story captures something uniquely uplifting about the human spirit. At the same time it’s funny, quirky, heart-warming and at times hilarious.

“Full of poignant moments, it’s about friendship, determination and hope. It makes you laugh, it makes you cry, and it leaves you feeling better about life than you did when you entered the theatre.”

Tickets to see ‘Calendar Girls’ on Wednesday 23rd and Thursday 24th October are still available and are priced at a flat rate of £7.00 each and are on sale every day at Stewarton Library. Alternatively, tickets can be reserved by emailing [email protected]

A licensed bar of wine will be on sale throughout the evening.

‘SDG….putting the “tea” into nudity!’

‘A show whose feel-good factor is sky-high’ – The Guardian

‘A marvellous, uplifting night at the theatre…….well worth a date in your calendar’ – The Daily Mail

‘It’s marvellous theatre…..guaranteed to make you laugh, cry and come out singing Jerusalem’ – The Mail on Sunday